Fresh Corn Chowder is a creamy, comforting, and flavorful summer soup.  It’s made with fresh roasted corn, roasted red peppers, tender potatoes, crispy bacon and a cream base made in a dutch oven. 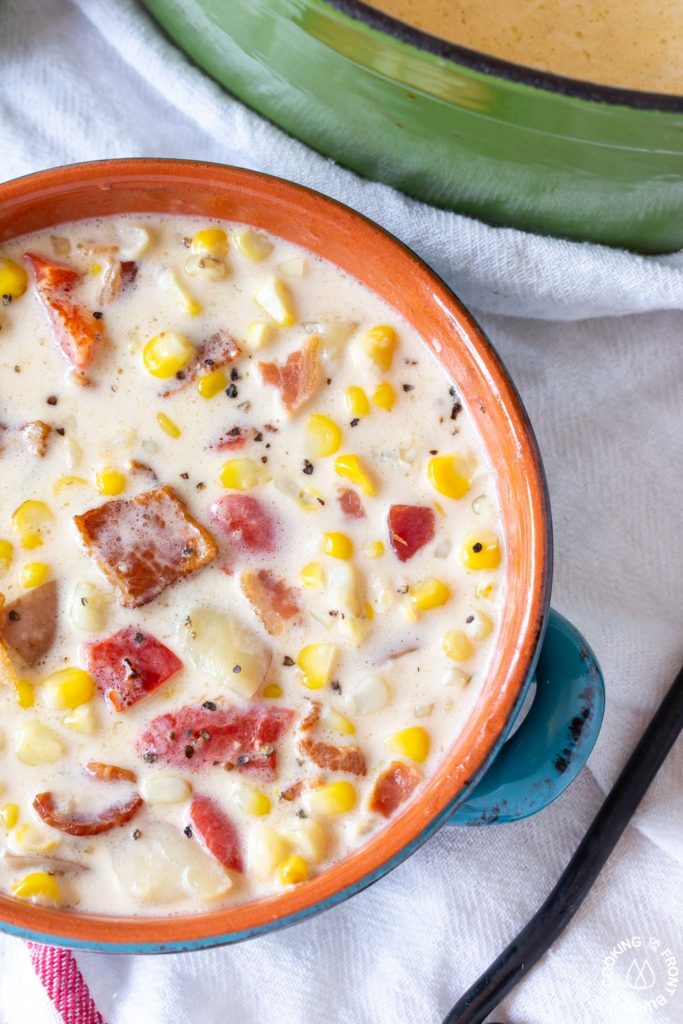 Summer produce is really putting on a show!  This past Saturday I went to our local Farmer’s market and came home with the most colorful, freshest and mouthwatering veggies.  I wandered from stand to stand buying a little bit here and there to spread the love to our local producers.

One of the most popular places with the longest line with the corn man…. I got 14 ears for $5.  I thought that was a great deal.  This homemade soup recipe highlights that fresh corn to create a chunky, hearty soup with bold flavor.

Don’t let summer pass without trying this fresh corn chowder.  It is easy to make and tastes great!

While chowder might be considered a fall or winter dish, there is nothing like fresh corn that is slightly charred on the grill to kick it up a notch!  Also, you may decide to roast your own red peppers* or buy the jarred (I did jarred this time). 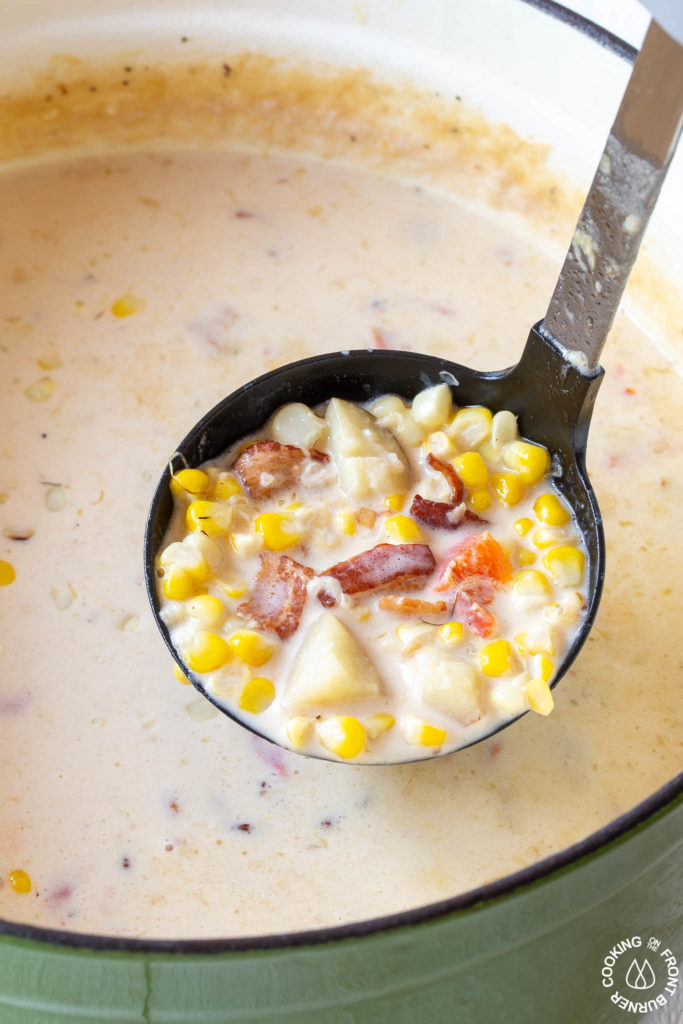 What ingredients will you need to make Fresh Corn Chowder?

*How do you roast corn and red peppers on a grill?

Roasting vegetables on the grill is easy to do but I do recommend that you keep an eye on the process by staying near the grill.

Roast red peppers by placing them on a hot grill and keep turning the peppers until there are blacked on all sides.  Place peppers in a plastic storage bag and let rest for about 10 minutes, then remove.  Skins should be easy to peel then remove seeds and stem.

The method I used for roasting the corn was removing the husks and silks, rinse under water, pat dry and then spray with vegetable oil (i.e. Pam).  Place on a hot grill and turn about every two minutes until slightly charred (takes about 15 minutes)

For the corn, you will want it to still have a crisp-tender texture.  If it gets charred too much, the corn will shrivel up and not have that texture.

The pictures will give you an idea of what they should look like – all charred for the red peppers and slightly for the corn.

I also love using my dutch oven.  It is heavy and helps retain the heat and cook evenly.

Look at all those chunks of yummy ingredients! 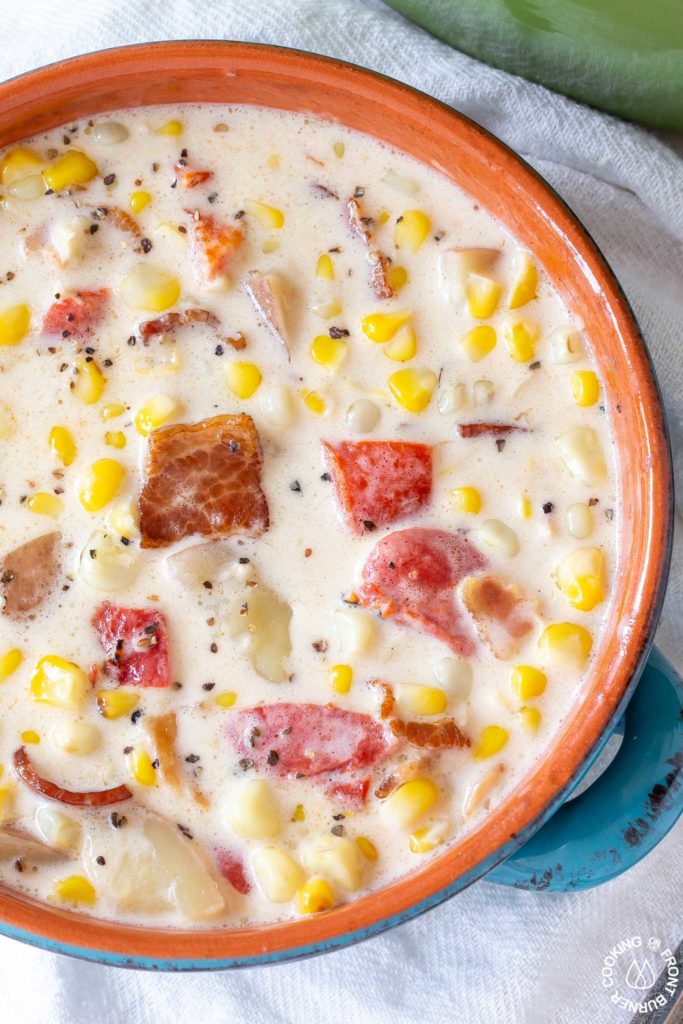 How do you thicken corn chowder?

The recipe calls for thickening with flour.  Another way to make your soup creamier, is to take about a cup of soup and puree in a blender and add back in.  This works especially well with soups that have potatoes. 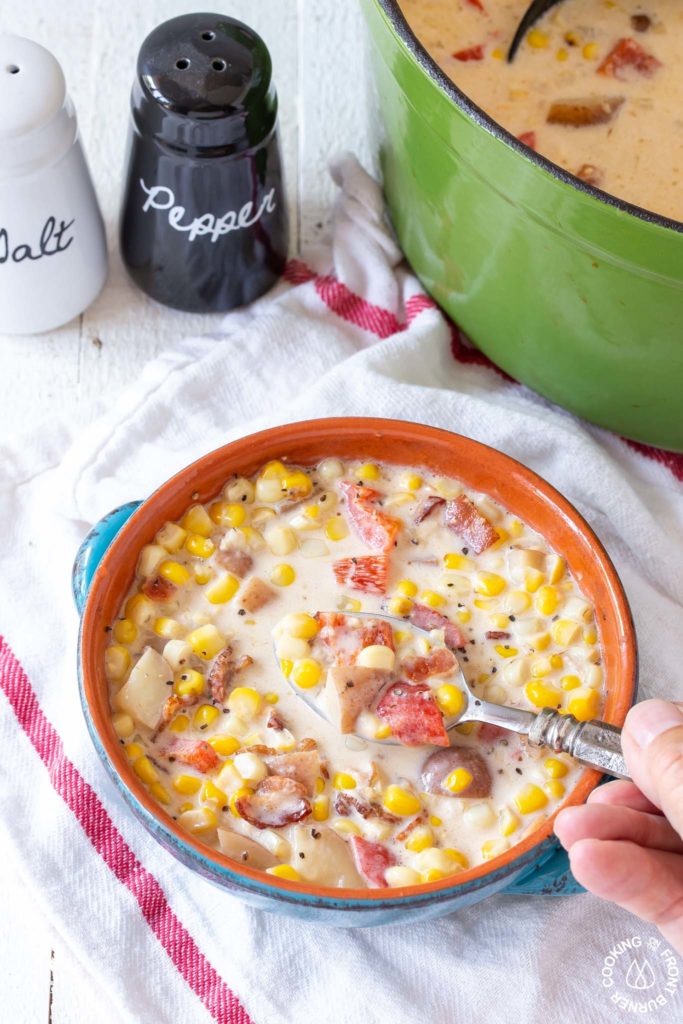 Since it is summer and you can find fresh ingredients now, I would like to recommend a couple other recipes that are are perfect for summer like these –  Easy Carrot and Ginger Soup and Fresh Tomato Basil.

I also love serving bread alongside soups, my No-Knead Rosemary Skillet bread would go great with this.

Update Notes:  This recipe was originally posted on August 6, 2013.  It has been updated with new photos and content.

As an Amazon Associate and member of other affiliate programs, I earn from qualifying purchases.