Be prepared to be wowed with one of the best tasting pizzas you will ever have!  You’ll love the chewy crust and gooey cheese in this easy pepperoni pizza recipe! 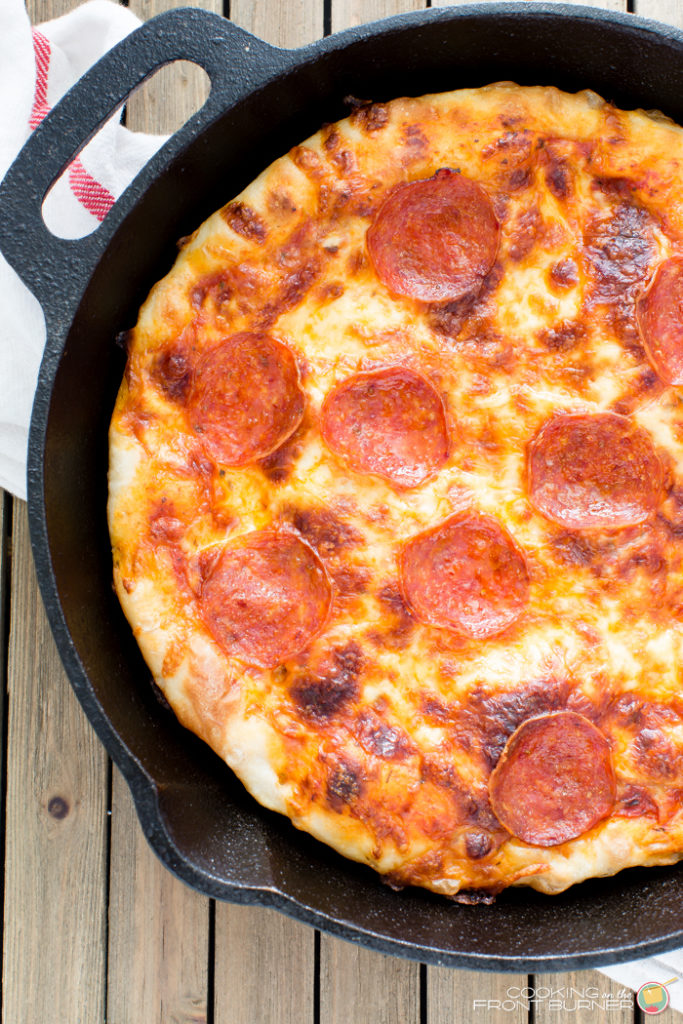 Friday night is pizza night about 99% of the time at our place.  About half the time I make it myself and the other half we order out.  By the end of the week, I’m just ready to have an easy, simple meal and not do a lot of fussing.

This cast iron skillet pizza might look complicated but I have to say it was one of the easiest pizzas I have ever made and I’ve certainly made my share over the years.  You will definitely want to give this one a try.

The main thing you need to remember is to start the dough a day ahead.  Basically, as you will see in the instructions, you dump the ingredients, stir it and let it sit overnight.  That only took me about 5 minutes and no kneading required!  Easy! 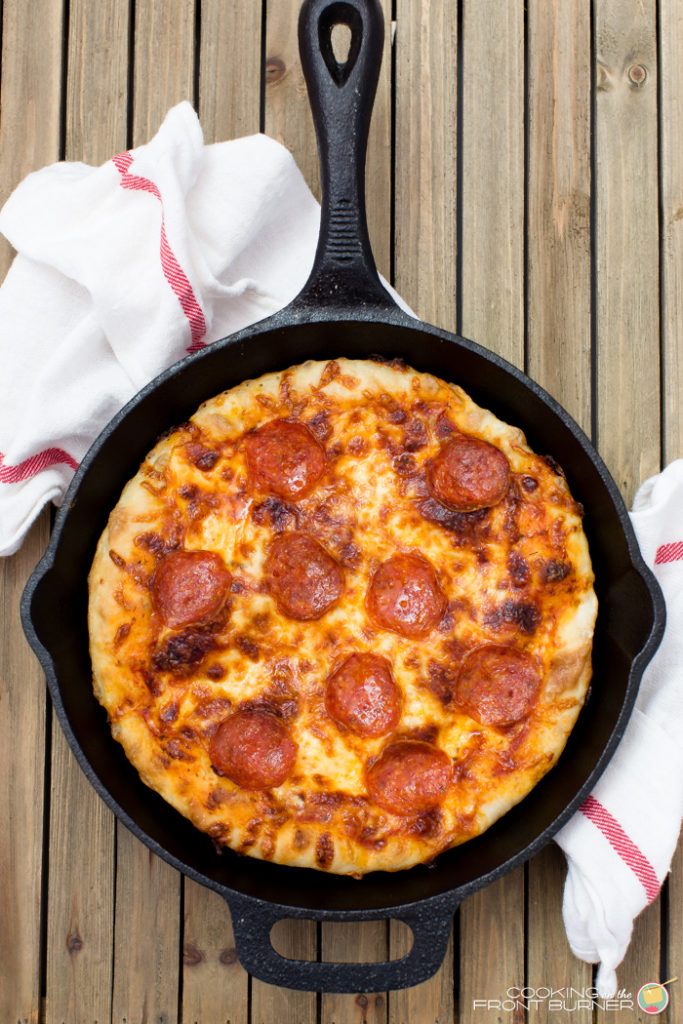 What ingredients will you need for Cast Iron Skillet Pizza?

What other toppings do you like on your pizza?  The DIY likes m-e-a-t, so even when it’s not a cast iron skillet pizza, we have must have some of that on our pizzas!  We also like mushrooms, green peppers, green olives, ham, pineapple and if I’m not eating it, then John may have anchovies.

Let’s talk about crust – do you like thick or thin?  Cast iron skillet pizza crust is on the thicker side and has a nice chewy texture, with lots of air bubbles in the dough (a sign of a good crust).

We are originally from upstate New York and are used to a thinner crust with not a ton of sauce.  When we moved to the midwest 25 years ago, it was hard to find that type of pizza, so I usually made homemade pizza. 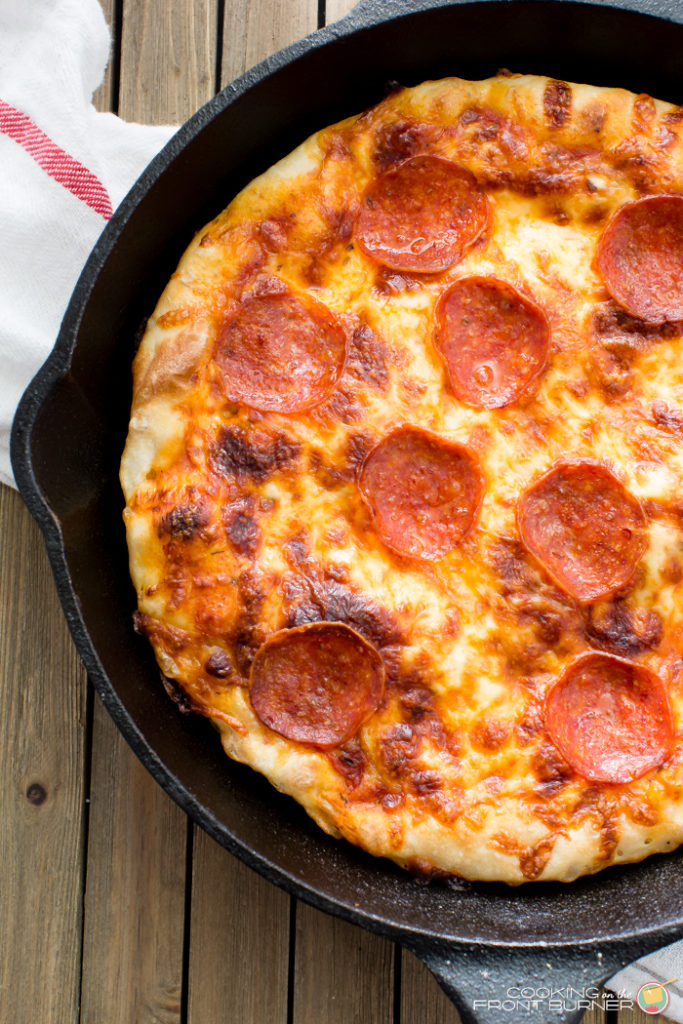 Ok, lastly let talk about cast iron skillets!  I really love mine and have two sizes – this 10″ one and a 12″.  I recently made these Lemon Pull Apart Rolls in a skillet and Roasted Rosemary Potatoes that make a great side dish.  I plan to make some Pecan Rolls soon so be sure to come back for that recipe.

Oh and I also want to note that this cast iron skillet pizza recipe is perfect for two people!

Put this easy homemade pepperoni recipe on your menu soon! 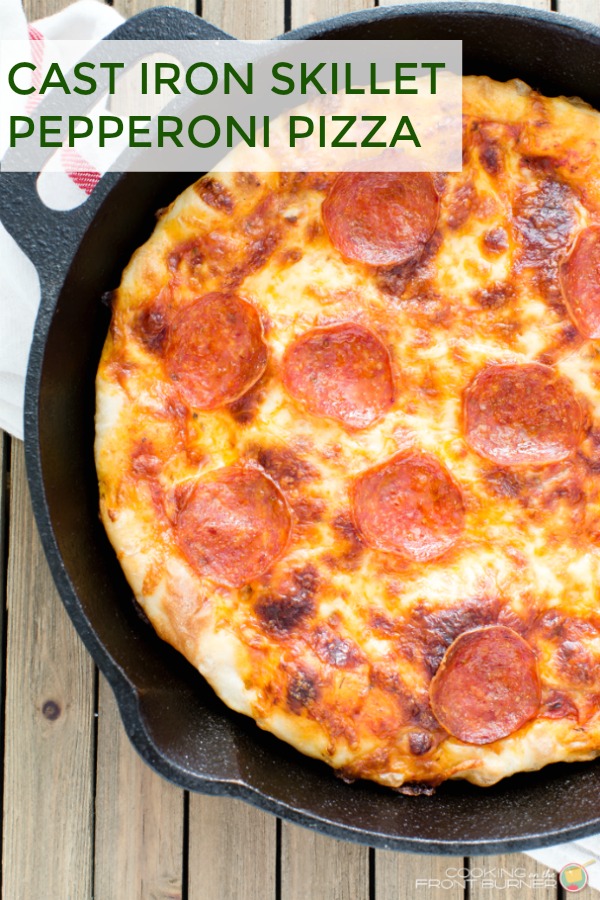 You may want to try different toppings and it might be best to par cook them to get some of the moisture out.